As part of the New York By Norse event, Vivek Venkatesh of Grimposium and David Hall of Uneasy Sleeper revealed exclusive content from Enslaved 25, their multimedia collaboration co–produced with us, on Dec. 10th 2016 at Gramercy Theatre.

At 6pm on December 10, 2016 – at Gramercy Theatre as part of the New York by Norse event – Vivek Venkatesh of Grimposium and David Hall of Uneasy Sleeper revealed exclusive content from Enslaved 25 – their multimedia collaboration co–produced with Norwegian progressive metal legends, Enslaved.

Come experience a mini-documentary and excerpts from Enslaved’s biography which explore their origins from the Norwegian towns of Etne and Valevåg, as well as newly unearthed recordings from the Phobia demo, specially excavated from their vaults! Hear first-hand from the founders of Enslaved, Ivar Bjørnson and Grutle Kjellson, as they recount their first European, North American and Mexican tours. We explore the creation of the unique aesthetic quality of Enslaved as well as their most recent commitment to creating arts-based public pedagogical experiences in schools and communities across Norway.

Bardspec (Enslaved’s Ivar Bjørnson feat. Kevin Hufnagel of Gorguts)
The BARDSPEC is the Ambient project of Enslaved composer/guitarist Ivar Bjørnson. This showcase featured the set-up of Bjørnson: his computer, some keys, a few strings, a pedal or two, a video canon and sometimes, a trapeze artist. Dark, surprisingly rhythmic and hypnotic-psychedelic, yet minimizing, cutting away, subtracting and meditating upon the simplest essence of things, Bardspec uses of the best of the basic elements and building blocks that make up the whole to create a sonic atmosphere. Here, he was joined by none other than Gorguts guitarist Kevin Hufnagel.

Einar Selvik Workshop – “The Thoughts and Tools Behind Wardruna”:
Einar spoke about his approach to Norse historical music and the extensive creative concept behind Wardruna´s ongoing Runaljod trilogy. Other topics included his approach and study of the runes and other Norse esoteric arts, the oldest Nordic instruments, playfully acoustic Wardruna music, including the newest release of the trilogy, “Ragnarok” and a Q&A segment.

Enslaved 25, “Then and Now” – Two sets, one night!
New York By Norse will conclude with Enslaved 25, in order to celebrate a quarter-century of one of Norway’s most revered artists. The band  played two set, each highlighting the uniqueness of, but also the coherence in, the “Then” and the “Now” in Enslaved’s history. This showcase will feature a performance by Einar Selvik, along with pieces of musical project Skuggsjá featuring both Selvik and Bjørnson. Kim Holm was on site creating live paintings of the event sold after the show.

“2016 is Enslaved’s 25th anniversary as a band, and it is simply not acceptable leaving the US out of our celebrations. With a crazy schedule set for the year, we were turning every stone for an opening – and we found one! We are extremely proud to be able to present a double set in New York; to give the full width of old and new material, in conclusion of a fantastic year of celebration. When we started talking about By Norse and how we could bring the concept out into the world; “New York By Norse” was one of the first ideas to be verbalized. At the time it seemed more like a dream scenario than anything else. Then came London By Norse in March earlier this year; our first materialization of the concept – and it was a massive success! Turns out all these crazy visions were possible to turn into real life after all… and here we are.“ – Ivar Bjørnson of Enslaved. 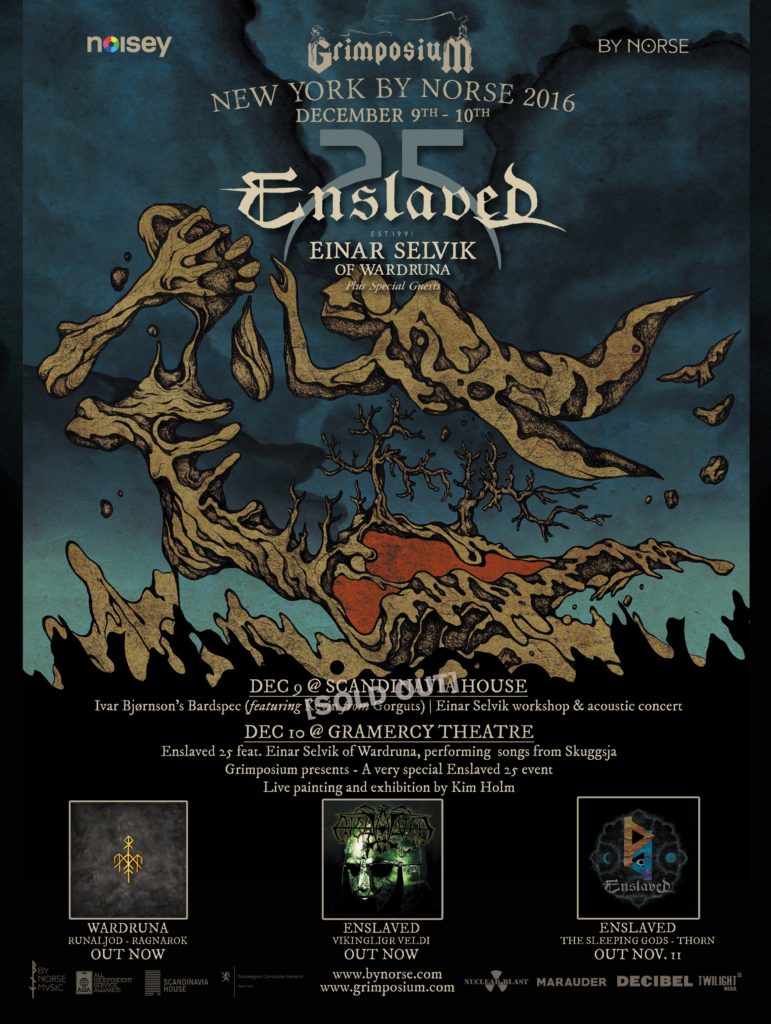