No Outsides: Metal in an Era of Contagion 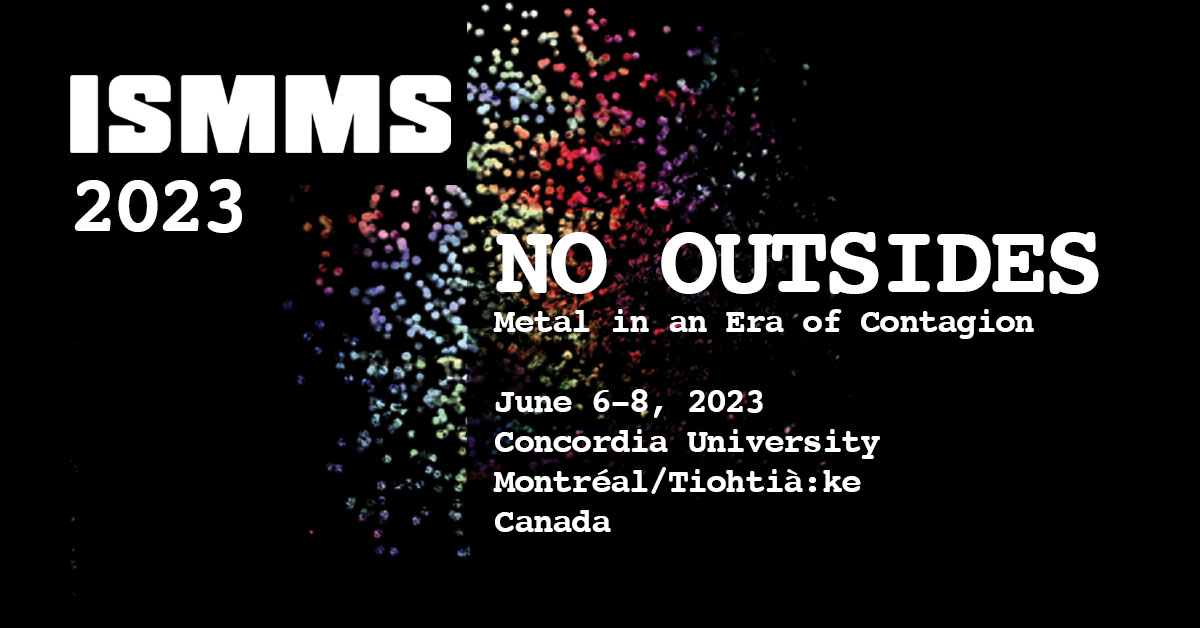 Six decades from its counter-cultural inception, what remains of metal’s relation to the outside forces of extremity, abolition, and transformation?

If there’s a common commitment to which the field of metal studies remains faithful, it is one invested in the outside. Such fascination is given expression through the perennial encounter with boundaries, limits, and norms endemic to the musical and symbolic aims of metal music. At its most overt, metal’s alliance with the outside figures in its orientation to anti-establishment and anti-conformist attitudes and practices remote to established social ‘standards’ and the homogenization of culture. Elsewhere, the prevalence of the outside in metal occupies a central role in its musicological expressions as they probe the limits of compositional aesthetics and sonic intensity. The lyrical and visual preoccupations of metal have equally harnessed the outside in their experimental fidelities to profanation, abject horror, and confrontation with those repressed horrors that eclipse the threshold of social permissibility. The academic and para- academic fields of ‘metal studies’ have a long-standing fascination with the outside in their analysis of metal’s abject social status and powers of aesthetic revolution mobilized by peoples ‘omitted’ from the ‘official’ canon of the State. Metal is allied with the outside through which it enunciates another people and another world.

In more recent years, the question of the outside has been transformed and made to encounter the field’s own internal allegiances and commitments while exploring the periphery. Despite the automatic presumption of metal’s outsider ethos, the question of the outside points also to its ‘normative’ gestures. Such ‘normativity’ is evident across a body of scholarship that has pointed to the lingering heteronormativities of the metal expressed in its sometimes ideological and identitarian entrenchments of heteronormative masculinity, paranoiac forms of xenophobia and conspiracy, and thanatotic drives that seek everywhere to habilitate the scene of death without transformation. Elsewhere, the question of the outside exposes where metal has lapsed into cliché expressions that not only fail to induce a shock to sense, but are easily absorbed into the now routine catastrophes of mass death, extinction, social ruination, and civilizational collapse commonplace within mass culture in a contemporary milieu already replete with perpetual unrest, destruction, and decay.

Commentators of heavy metal music have similarly produced their scholarship at the paradoxical intersection of extremity and standardization, where for instance a litany of metal studies has occupied itself with ordering metal into strict taxonomies of naming, filiation, and style in a manner antithetical to the destructive and anti-conformist ethos of metal itself. Where the outside and the extreme are continuously recuperated through standardized study, not to mention a range of fascisms, big and small, the question is perhaps not how to push the field further or towards some new, more extreme outside, but how to form a new relation to that which is perceived as outside in the first place. After all, the outside does not imply the existence of a discrete exterior and/or transcendent category, but instead refers to the processual folding of inside forces that nevertheless constitute a perceived outside.

The 2023 iteration of the International Society for Metal Music Studies (ISMMS) conference takes seriously the questions raised by the spectre of the outside that everywhere haunts scholarly inquiry, for better and worse.

In order to further explore and extend the question of metal study’s relationship to the outside in an era of contagion, we invite proposals that take up inquiries in relation to any of the following topics:

Plurality and Polarization: Social, cultural and/or political analyses of the role of plurality and polarization within metal music and its study; Examinations of extremity and metal in an era ofdisinformation; Theoretical investigations of the role of difference, diversity, plurality, and multiplicity in relation to metal (studies).

Queerness and Strange Outsides: Explorations of metal (studies) in relation to queer futurity and strange vantage points; Interrogations of metal’s ‘outsider’ status in an era of ongoing standardization; Theoretical investigations of metal’s dis/alignments with questions of gender, queerness, masculinity/femininity.

Futurity and Fatality: Explorations of metal against changing backdrops of ecological, socio- political, and economic realities; Experimental and/or speculative studies of the ‘future’ of metal music and its studies in an era of ecocatastrophe.

We welcome proposals that raise other related topics and questions to those outlined above. Let us know what you’re thinking!

– Individual presenters can propose a 15 minute paper, which will be grouped with other individual papers in relation to conference topics and/or shared themes.

– Groups of presenters can propose a 60 minute panel, conversation or roundtable based on a central question or topic related to the conference themes.

– Presenters can propose a 20-60 minute workshop, performance, or other interactive session where they work with participants to explore a question or topic related to conference themes. (Shorter performances/workshops may be grouped with others.)

Other ideas for interventions and/or explorations of the outside are welcome! Have another idea? Let us know what you’re thinking! Reach out to us at [email protected].

Questions or more information? Reach out to us at [email protected].