Psychoanalytic thinkers and cultural theorists alike have noted the internal deadness so rife in our time accelerated, neoliberal societies. Is this deadness a product of accelerationism, wherein the most likely outcome of frenzied capitalism, hyper-consumerism and technocractic social media is a terminally-ill post-human, devoid of any sense of community, and constantly in search of identity? Or is this deadness a transitional space through which we might reflect on our hyperreal consumption of death, dystopia, and destruction – both literal and figurative?

For many patients, deadness can present as ego syntonic to the extent that it is the Janus-face of neoliberal subjectivity. As neoliberal subjects, we are pressured to orient around the external and marketable image rather than the internal life of reverie and passion. We might mimic aliveness through compulsive ‘self-care’ in order to present as desirable and successful in a market-driven culture, yet we suffer an internal deadness as a consequence. Some patients might unconsciously desire deadness due to its marketable presentation, thereby enacting a psychosocial necrophilia at the heart of neoliberal subjectivity, but others might use deadness as a transitional space for performing identifications that subvert popular biopolitical notions of “life”. This panel draws on clinical and cultural examples to illustrate the creative potential of deadness, yet attention is also given to such potential’s destructive counterpart, especially as it is evident in our current sociopolitical climate where discourses of enlivening change can in fact fortify a dead object that relies on, to quote Frantz Fanon, the “corporeal malediction” of othered bodies.

Initiated by Grimposium – an international collective of extreme metal music enthusiasts, academics, visual artists, journalists, filmmakers and musicians – this conversation took up the concept of necrophilia as both a potentially creative and yet often destructive phenomena that bears on psychical, cultural, and political processes in overdetermined ways. Concordia University professor, filmmaker, and founder of Grimposium, Vivek Venkatesh, PhD discussed his work on the critical and reflexive rejuvenation of extreme metal music through a socio-anthropological and cultural analysis of necrophilia, blasphemy and solipsistic individuality. Psychoanalytic psychotherapist, visual artist, and death metal vocalist, Daniel Butler, MA turned to the concept of psychosocial necrophilia and offered both clinical and cultural material for illustration.  Discussant Stephen Hartman, PhD located these presentations at the nexus of psychic and social forces that paradoxically present opportunities to elaborate aliveness with deadness, subjectivity via depersonalization, and dis/embodied relatedness.  Moderator, composer, lyricist, musician and PINC Administrative Assistant, Leila Abdul-Rauf, MS introduced the symposium discussion in light of her unique experience as a veteran of several Grimposium events. 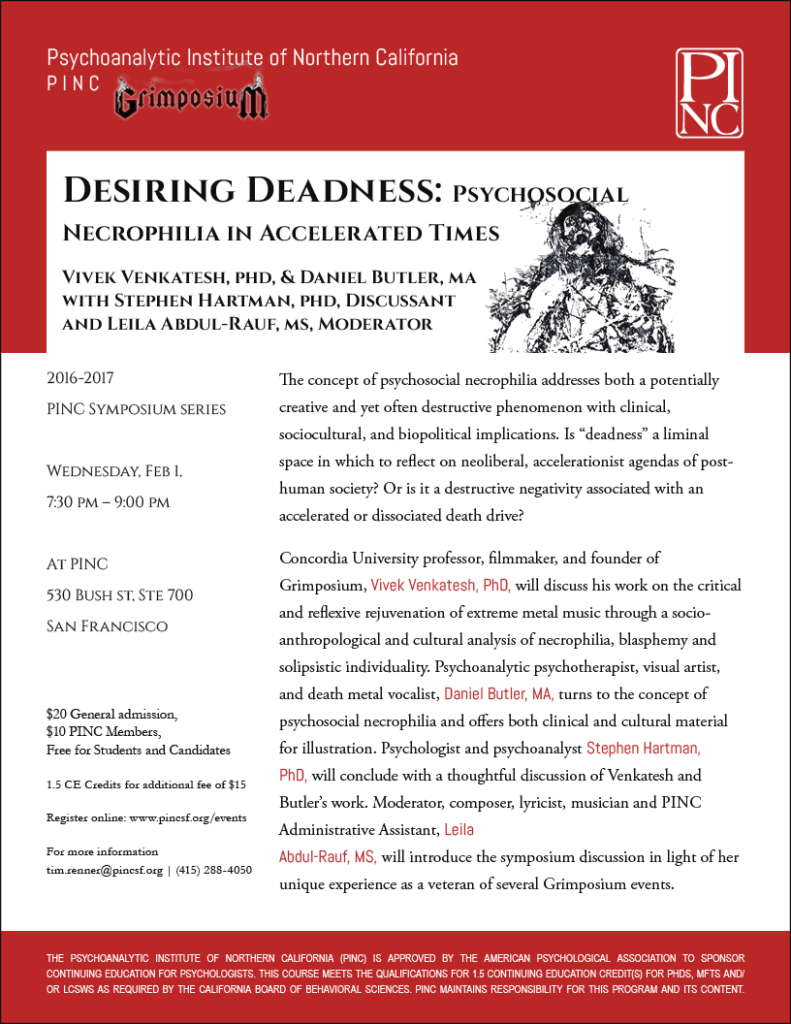 DEATH METAL VICTORY
Friday, Feb. 3 $10 at 8pm. 21+ at Eli’S MILE HIGH CLUB
Thanks to our brothers Chad, Luca, Dan and Shelby for setting this up and agreeing to include Grimposium in their plans.
Desiring deadness in the flesh …
Facebook event here. 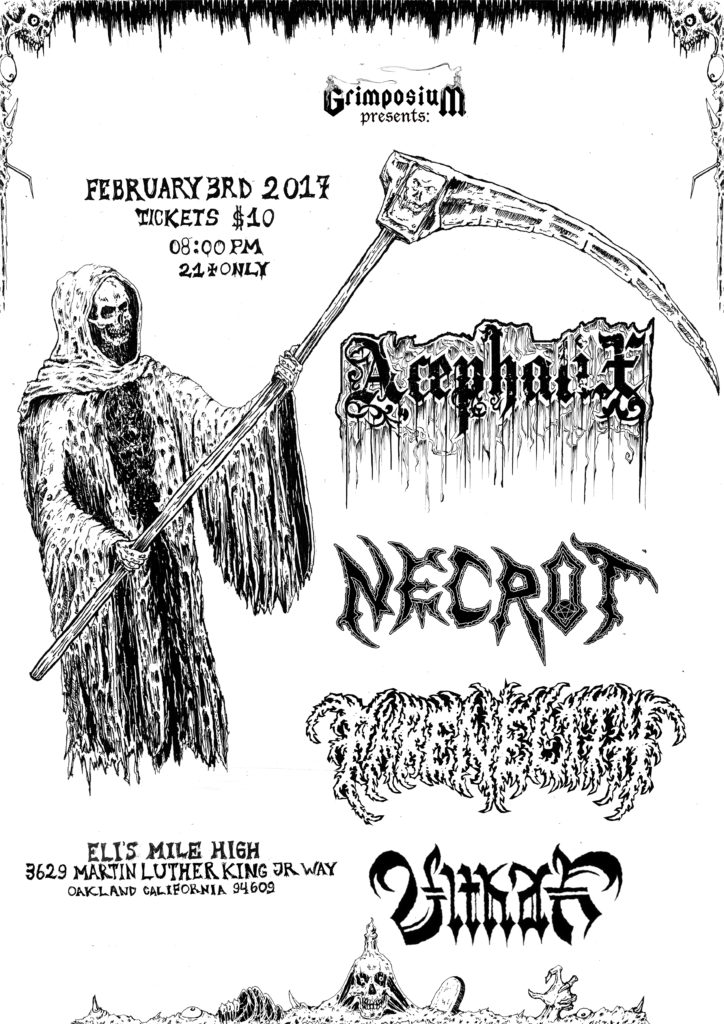